NEW BOOK: “AMERICA IS TOO YOUNG TO DIE!” 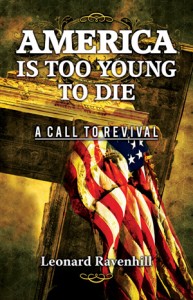 “IT IS TIME TO QUIT PLAYING CHURCH!”

For the last fifty years I have watched Great Britain decay during her lingering agony of alternating fits of sanity and of stupefaction. Today England is no longer considered a world power. Most say that she is both morally and spiritually decadent. Must the United States follow her? I pray not. We are considered by most folk to be on the skids. Our dollar is sick. Our morality is sick. At two o’clock one morning a man called me and tearfully sobbed, “Ravenhill, I am just reading Why Revival Tarries, and I found out three things: my Nation is sick, my church is sick, and I am sick.”

These are the last days—how long will they last? God has a remnant. He calls us to battle principalities and powers. “Lead on, O King Eternal,” cleanse us and heal our land. 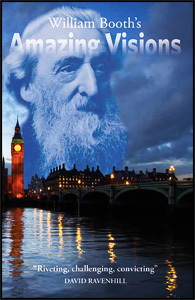 “I was alone in heaven!”

“My thoughts went back to earth, and as though by an angel’s hand, the history of my past life was unrolled before my eyes. What a record it was!”

“…for it described in detail the objects that had influenced me during my earthly career. It set forth the purpose for which my thoughts and feelings and activities had been mainly spent and brought forth the ends for which I had employed my time, my money, my influence, and all the other talents and gifts with which God had entrusted me to use for His glory and the salvation of men.” (excerpt from Amazing Visions)

David Ravenhill was born in England in 1942. He graduated from Bethany Fellowship BibleCollege in Minneapolis where he met and married his wife Nancy. In their early years, David and Nancy served with David Wilkerson’s first Teen Challenge Center in New York City. Following that, they worked with YWAM (Youth With A Mission) for six years which included two years in Port Moresby, Papua, New Guinea.

From 1973-1988 David was on the pastoral team of one of New Zealand’s largest churches, the New Life Center in Christchurch. David & Nancy returned to the States in 1988. The following year they joined the senior leadership team of Kansas City Fellowship under the leadership of Mike Bickle.

From 1993 David served as the senior pastor of a thriving church in Gig Harbor, Washington. He resigned in 1997 to commence a full time itinerant ministry throughout the United States and overseas. David also taught in the Brownsville Revival School of Ministry in Pensacola, Florida as well as maintaining a busy itinerant ministry. During and following their time in Pensacola David traveled with Evangelist Steve Hill and the Awake America Crusades. 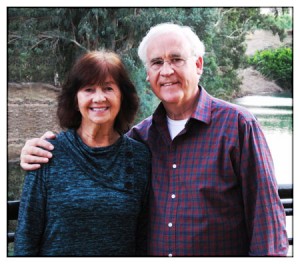 The Ravenhills have recently relocated to Siloam Springs, Arkansas from where David continues his itinerant ministry.